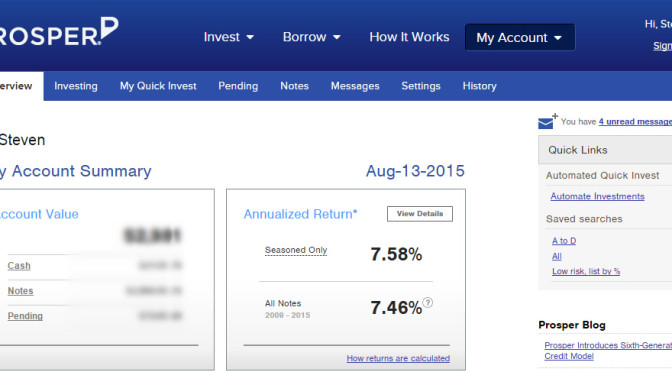 It’s been a while since my last post, but checking in with my Prosper account (now having gone through 172 notes), some very interesting observations I’ve made when focusing on notes where borrowers have NEVER had previous delinquencies.

(Would’ve loved to make an infographic for this, if not due to lack of time!)

1. Proportionally speaking, since most of the portfolio is Grade A, it make sense that there are more Grade A charge-offs and lates.

3. If trends hold, my hypothesis of selecting only notes with borrowers that have no previous delinquencies may be the filter needed to be used to target higher returns by focusing on grade B/C/D notes – while minimizing risk.

This topic will be revisited in another 3 months, around November, when more of our C & D graded notes would be about a year old!

As a quickie update to my previous Prosper.com post, I had a quick chance to review / look at my notes that have been charged off, in collections, or in bankruptcy.

Let’s start with the facts:

From Propser’s website, the expected loss of principal for the various ratings are (at the time of issue):

So, simple arthimetic would indicate that either my sample size of (100) is still too small, or that Prosper’s “estimated loss” numbers can’t truly be trusted as they may be underestimating of the expected loss. (i.e. how were these numbers derived in the first place?  Does it vary over time, or by buyer’s stats & numbers?)

In addition, I found this interesting article, which seems to indicate that 5% is the expected default rate of loans:
http://www.lendingmemo.com/lending-club-prosper-default-rates/

Based on the above, and since I got back “average” results of a 5% delinquency/charge-off rate – some interesting conclusions can be drawn, which warrants further investigation & research:

Some interesting follow up questions come to mind when revisiting this in the future, as the C & D notes grow older and the original (104) notes get closer to their maturity:

1. Since my second round / reinvestments and the additions of C and D rated loans didn’t start until April 2014, what will be the % default by August 2015 (another 16 months after the start of those notes’ purchase)?

2. Adding in the variables of “no previous deliquencies” did not seem to have any affect on AA, A, and B rated notes from the expected result. Will this trend be the same for C & D notes, to at least minimize the expected higher levels of default?

3. Do most defaults occur early in the life of the loan (as shown by the 1st lates being in 3-4 months from issue on the “A” rated notes”?  Or, do they occur in the middle, or end, or is it just random?

It’s fairly obvious to anyone that the key to success on Prosper is to find, identify, and skip the loans that will default – but what characteristics should be looked at, besides the obvious numbers like FICO score?  Clearly, the 5% expected loss really weighs down on on the final result. (That is to say, if the loss was actually 0%, the expected return would be around the 7.5% we’ve been getting + 5% = making total return around 12+% – handily beating stock market / mutual fund returns).

Obviously, 0% loss won’t happen – all we can do is reduce / mitigate it!

Let’s revisit this in the summer time, and we’ll see what happens then!